Despite the difficult covid conditions, we keep going on! 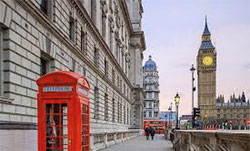 Four participants of the Royal Chance II project have returned from the third internship in London in recent days.

They bravely set out for England in mid-October, despite the coronavirus situation. After arriving in the UK, the interns had to go to compulsory quarantine for the first two weeks, which they survived in the town of Broadstairs near the coast and moved to London, where, however, they declared a national quarantine a few days later.
Two participants were meant to be working in the art studio Studio101 London, where the internship was carried out as the studio maintained limited operations. Two girls were supposed to work in the Czechoslovak restaurant Bohemia House, which, however, had to close down completely. We managed to arrange for them a replacement internship in the administration.
In the last week, restrictions in the UK have been relaxed, allowing interns to take the opportunity to see the sights, museums and other attractions that London has to offer. Although their work experience was influenced by the current world situation, the interns returned satisfied, full of new experiences. The last group of four should go to London in the spring of 2021.

Photos from preparation for the internship - by clicking enlarge photo